Genuine concern for the long-term impacts of herbicides has been rising and along with it the trend for sustainable alternatives to chemical herbicides. This concern led the way for a student to conduct a case study entitled, “Permaculture Field Research: Steam Weeder Experiment.” This case study, featuring Satusteam, investigated the effects of hot wet thermal methods in weed control.

This article will discuss the case study in detail – its hypothesis, methodology, results garnered, and the conclusions drawn. At the end of this article, we will see how saturated steam and boiling water improves the overall soil quality and soil microbiota.

Goals and Objectives of the Case Study

In particular, saturated steam was focused in the study. That’s because hot wet methods enable more rapid transfer of lethal heat into the cell structure of weeds and grasses. Deeper penetration into the meristematic cells make saturated steam a viable alternative for chemical herbicides.

The researchers then sought to investigate the effect of high temperature steam in both weeds and grasses, as well as its effect on soil life. They hypothesised that saturated steam decreases the soil biota activity.

Two quadrants of 1 sq. m. each were selected on a patch of Kikuyu grass (Pennisetum clandestinum) lawn. The researchers ensured that both patches receive the same amount of sunlight and shade, as well as the same plant intensity.

Weedtechnic’s SW900, the equipment used in this study.

As shown, the soil microbial activity increased after 24 hours of applying Satusteam™ during the first month.

In the second month, the same method was also adapted. However, the parameters were measured before, right after, and after 24 hours of applying Satusteam ™. The same trend was also observed. The application of Satusteam ™ leads to an increase in microbial activity, soil basal respiration, and soil biomass carbon. 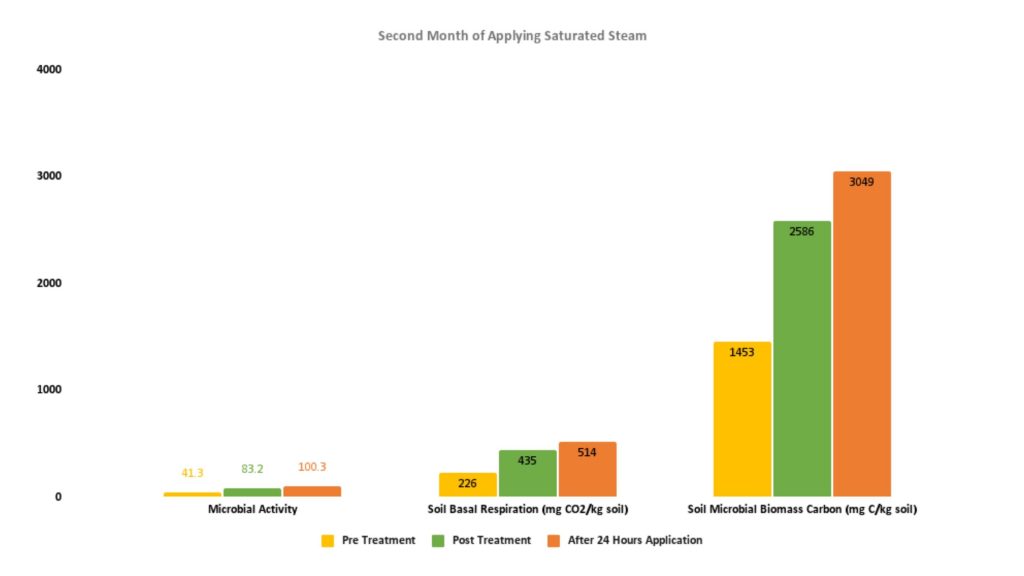 As shown, the soil microbial activity still increased after 24 hours of applying Satusteam ™ during the second month.

During the third month, there were some inconsistencies with the results. Right after applying Satusteam ™, microbial activity, soil basal respiration, and soil microbial biomass carbon increased. However, after 24 hours, all the parameters decreased. This might be due to the sampling technique and the environmental conditions during the time of the experiment. 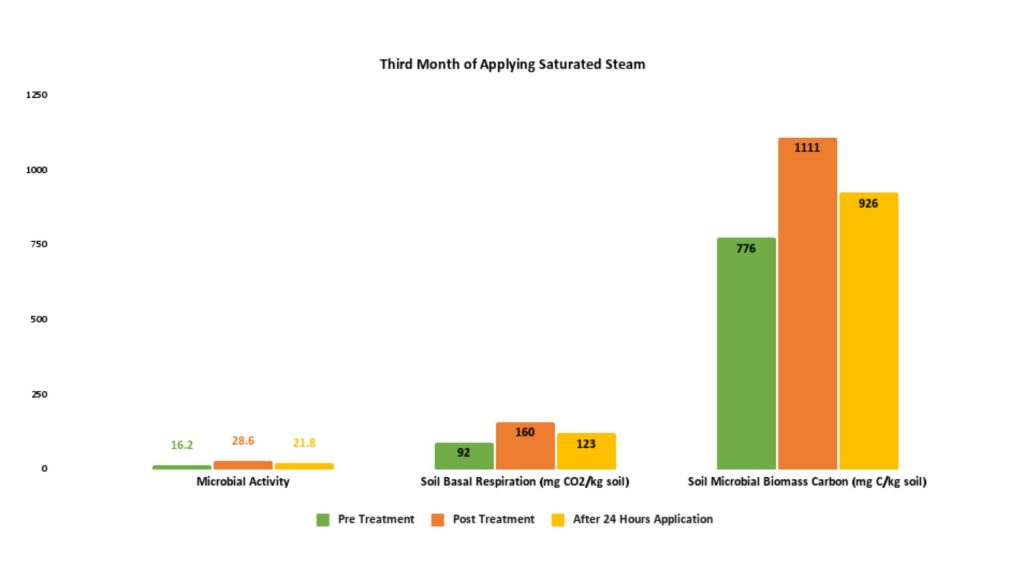 During the third month the microbial activity increased right after the application of Satusteam ™, but after 24 hours, it decreased.

The increase in soil microbial activity can be attributed to the fact that Satusteam ™ kills weeds by exploding their cells. The remnants of the weeds are not removed and it wilts in the soil, increasing the organic matter present in the soil. Microorganisms can consume these nutrients, and thus, enrich the soil quality.

Overall, the researchers of the study confirmed that Satusteam ™ increases soil microbial activity after the application of saturated steam and boiling water.

Martin Solomon loves both writing and researching. He graduated with a degree in Chemistry but decided to pursue his lifelong passion of writing about astrology, technology, science, and finance. He believes that if you can't excel with talent, then triumph with effort.