Why Satusteam™ is Better than Regular Steam Weeding Machines?

Why Satusteam™ and not Your Regular Steam Weeding Machine?

Steam weeding machines are continuing to replace herbicides™ for weed control across the horticulture and landscape maintenance sectors. Some councils have already announced they’re moving away from chemical weed control in favour of saturated steam after a successful trial period. Satusteam weeding machines are considered to be the safest and most effective alternative in managing the landscape.

The Weedtechnics Satusteam™ range is the saturated steam weeding technology that’s been steadily replacing herbicides for weed control across Australia and New Zealand. 46 councils and municipalities have so far started to free themselves from the 8 hidden costs of toxic weed control and are enjoying the satisfaction of breathing easy whilst destroying weeds safely for their communities.

Herbicides have been a popular choice globally when it comes to eradicating unwanted weeds. However, the effects of herbicides on aquatic life, soil biota, and human health have been the subject of continual scientific research and studies.

In a study¹conducted by Maria Aparecida Marin-Morales, et al., it has been found that harmful effects of herbicides on human health include the following:

⦿ Herbicides can be toxic to humans at high and low doses

⦿ Prolonged exposure can lead to several health effects, including the induction of diseases such as cancer and neurodegenerative, reproductive and developmental changes, and respiratory effects.

In response, regulators and decision-makers have been opting to reduce chemicals in vegetation management prompting the development of thermal, mechanical, and non-toxic weed control solutions, particularly in the last 20 years.

The  Weedtechnics Satusteam™ weeding machine was tested by the Eastern Metropolitan Regional Council (EMRC) in Perth Western Australia, along with a range of other organic weed control methods which revealed the effectiveness of organic weed management treatments, both alone and in combinations with other treatments. Findings of the study included the effectiveness of saturated steam weeding machines in managing and preventing seed set in most weeds including radish, lupin, perennial veldt, clover, wild oats, stinkweed, caustic weed, storksbill, flat weed and cape weed.

EMRC aimed to determine the effectiveness of high-temperature 100C saturated steam and boiling water on both weeds and grasses as well as the impact of steam on soil life. The report showed that saturated steam was effective on non woody weeds, with some taking multiple applications to kill if they had mature tap root or fibrous root systems.

In another study, permaculture practitioners discovered that microbial activity in the soil increases after treatment with steam. This is put down to the increase in decaying vegetation from the destroyed weeds on the surface, as well as the small addition of moisture during the process. There may be some short term changes to the fungi and bacteria mix within the soil, due to the high temperature mesophilic enjoying the short term high temperature, but the balance returns within 2-10 days ².

But why Satusteam™ and not your regular steam weeding machines?

Lupines flowers on background of meadow

Satusteam™ from Weedtechnics is created by increasing the boiling point of water through pressurisation, allowing the water to be superheated to approximately 118 – 120 oC without it actually boiling.  This allows the superheated liquid to be delivered through the delivery hose and cool touch lance to an applicator head. The superheated liquid is depressurised in a depressurising nozzle assembly,  expanding into a mixture of Saturated Steam and boiling water, which we call Satusteam™. This delivers our unique mixture of saturated steam and boiling water at 99-100 oC, at a very low pressure similar to heavy rain, at close proximity to the weed and at enough volume to completely cook them instantly.

Hot wet methods such as Satusteam™ and hot water weeding machines are considered more productive as the heat transfer from fluid is greater than heated air or flame. Satusteam delivers at a volume which allows it to penetrate and destroy the subsurface growing tips of plants which delay their regeneration much longer than hot steam or hot dry methods. 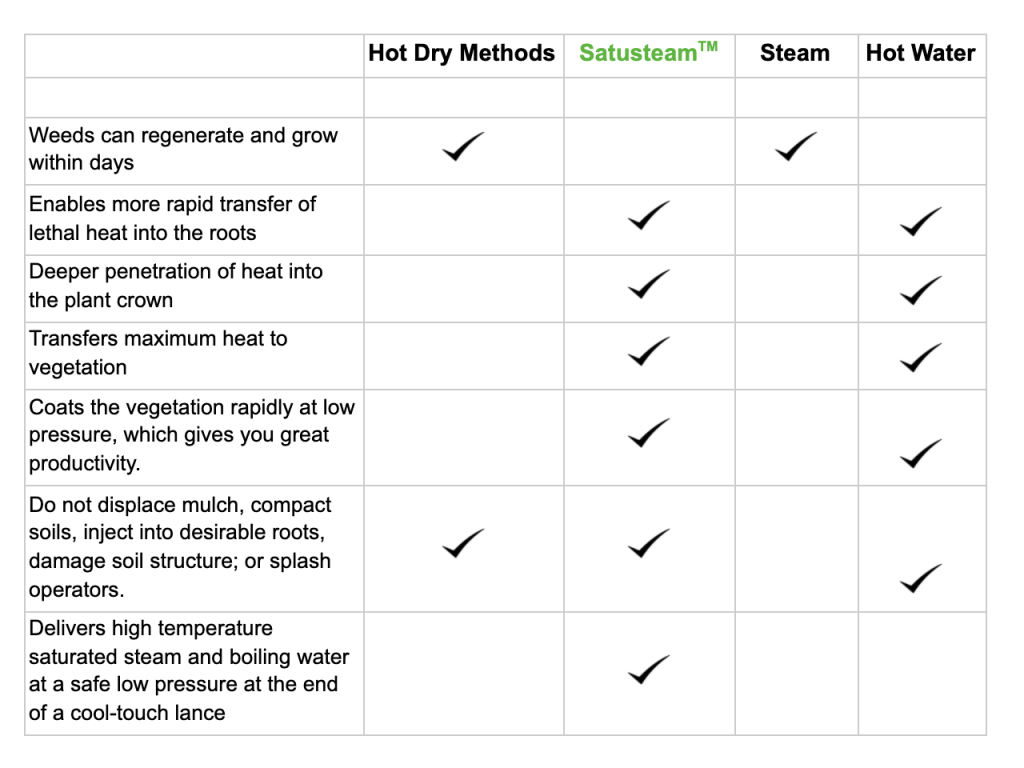 Satusteam™ is financially viable as allows operators to treat large areas productively and reduces water usage to as little as 5L/minute (1¼ gal) for typical spot treatment of weeds in garden beds and on hard surfaces.

⦿ Satusteam™ is a steam weeding solution that works in preventing unwanted vegetation from regenerating quickly.

⦿ Satusteam has beneficial effects on the soil.

⦿ Weedtechnics machines are a weed control solution designed perfectly for use by technicians managing weeds.

⦿ Satusteam has been shown to improve the presentation and reduce costs over time.

² Toxicity of Herbicides: Impact on Aquatic and Soil Biota and Human Health. (Intechopen.com, 2013)