Satusteam or Steam? - as an alternative weed management strategy - Weedtechnics

Satusteam or Steam? – as an alternative weed management strategy

I read with interest the details of the recently published Comparative Analyses of Glyphosate Alternative Weed Management Strategies on Plant Coverage, Soil and Soil Biota (1) from Deakin University.  As a long-time vocal advocate and practitioner for a shift away from glyphosate and other herbicide-dominated horticultural practices, in favour of biological, botanical, regenerative, employment-generating approaches, it is satisfying to see how well “steam” stacked up.

The report abstract states that of all the alternatives, Glufosinate, imazapyr and “steam” may be considered alternatives to glyphosate for reducing weed coverage, but may not be as effective or have undesirable off-target effects. The alternatives being “not as effective” as glyphosate is no surprise really, after all glyphosate has become the most used chemical toxin in Australia and globally, because of its efficacy. Its overuse is pervasive and the cumulative effects environmentally and on human health are well documented and the subject of lawsuits across the globe. Also of no surprise was the risk of deleterious off-target effects from imazapyr. It is a schedule 2 poison, is very mobile in the soil, has a half-life of 5-6 months as well as a pre-emergent effect. It should be used with extreme caution in proximity to desirable vegetation or when endeavouring to regenerate from native seed banks.

The report concludes “Overall, glyphosate provided the most consistent and controlled reduction to weed coverage at both sites over 12 weeks, without any marked impacts to soil biota. Ultimately, glufosinate, imazapyr and steam may be considered glyphosate alternatives for use in urban environments. However, careful consideration of appropriate situations to replace glyphosate with these alternatives is essential for optimal weed reduction and minimization of deleterious off-target effects.”  Some may see this as an open door for glyphosate use. I beg to differ. There are a number of reasons why.

For those of you, like me, engaged in illuminating practices against the dark arts, of unfettered toxic weed control.  I have some points to combat those that would cherry-pick the conclusions of the research in order to resist changing their management of weeds from the use of glyphosate, or to overturn innovative and progressive policies banning its use. 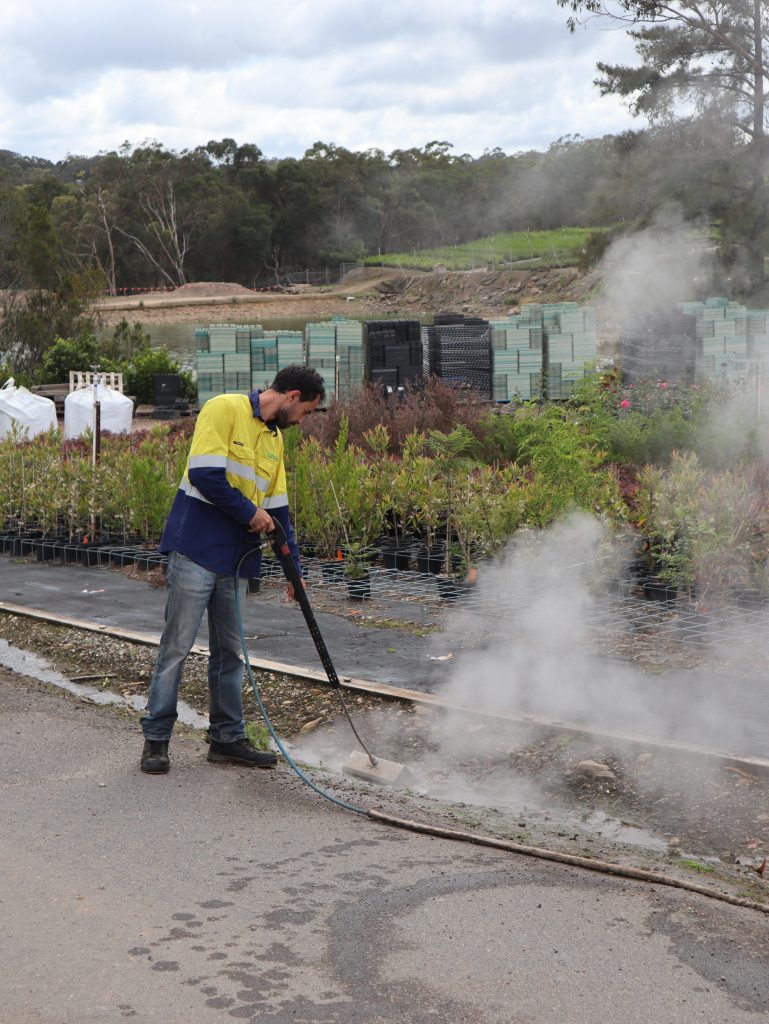 But for now, let’s talk about “steam”, what we can surmise was used in this trial, and why this “steam” should not be considered for use in effective weed management,  but Satusteam is.

Now full disclosure here from me.  I am the managing director of Weedtechnics, and have spent a good part of the last 25 years using and developing applications for steam, hot water, and now a mixture of saturated steam and boiling water for managing weeds. I am the co-inventor of this mixture of saturated steam and boiling water which I coined “Satusteam”. I can say with absolute authority that “steam” ain’t Satusteam when it comes to vegetation management, and the comparative analysis paper stops short of comparing all the hydro-thermal alternatives available.

The machine used is not disclosed. It was not a Weedtechnics machine.  I can say this with certainty as the operating temperature was too high being 140 °C to 180 °C.  Our satusteam machines operate at 115C -120C.   The operating speed in the trial was 10–20 seconds per 0.015 m2, which is at best 11 minutes per square meter.  Please correct me if I am wrong.  It is little wonder with such slow application of “steam” that the soil profile became heated through and affected the soil biome.

Unfortunately, the study did not include Satusteam (c).  Weedtechnics was not contacted to take part.

It is a concern for me that the use of the descriptive word “steam” used in the study may be adopted by influencers and decision-makers resistant to moving away from herbicides and will be applied and used to dismiss the more efficient technologies like ours that do not use “steam”, but a much more effective solution of depressurised superheated water.

What I have come to know in developing our basic formula for efficient weed control using Satusteam are these fundamentals.

Whilst the weed control results achieved with our Satusteam machines are very comparable with the ‘steam’ used in the research, (> 80-90% vegetation control after 4 weeks) our application is very different to that described.  Our coast care and landcare users have experienced natural regeneration of indigenous seed banks when they stopped using chemicals and switched to Satusteam.  What might this suggest about any changes in soil biota?

The report correctly points out that “Steaming is increasingly being considered by local government and industries as an alternative option, as it reduces weed viability instantly; and is more viable than other manual weed eradication techniques”.

“Steaming” has become a generic term used for the various methods of hydro-thermal weed control available. I can take some of the blame for this having started in the late 90’s with a steam weeder, The Steamwand, which did use steam but proved uncommercial as it was toooooo slow.  It was replaced in 2005 with the Steamwand phoenix, rising from the ashes of the failed Steamwand and subsequently a failed hot water weeding unit. The SW phoenix delivered the new mixture of saturated steam and boiling water, Satusteam.  Now, here we are a number of models later and exceptional weed management is being experienced by our hundreds of government and industry customers. We would drop the use of the word steam altogether but it works well in SEO!

Overall “Steam” performed very well in the research. There is no silver bullet when it comes to weed management.   Our government and organic customers alike attest that for many situations Satusteam™ is the excellent tried and proven glyphosate alternative.

PS. If you are curious to discuss any of this information in more detail, let’s chat. Please send an email to support@weedtechnics.com.

Weedtechnics developed the process of creating Satusteam here in Australia,  achieved patent protection, and is commercialising it across the globe.

Weedtechnics™ and Satusteam™ are copyright and registered trademarks of Steamwand Technology Pty Ltd.