Satusteam™ And Tracktech: Is it The Best Weed Control Method? - Weedtechnics

Satusteam™ And Tracktech: Is it The Best Weed Control Method?

Satusteam™ has been at the forefront of promoting sustainable and effective weed control methods for horticulture. Through the years, changes have been implemented to improve its mission of providing “bespoked” solutions for people who need to eradicate weeds in their orchards, vineyards or similar. And we’re not even done yet!

Featuring Tracktech, the newest Satusteam™ weed control solution for anyone who has been looking for ways to control weeds in these environments.

The Tracktech solution has been designed to follow the contours of your property, ensuring the very best contact of Satusteam™, and so being effective in killing your weeds. 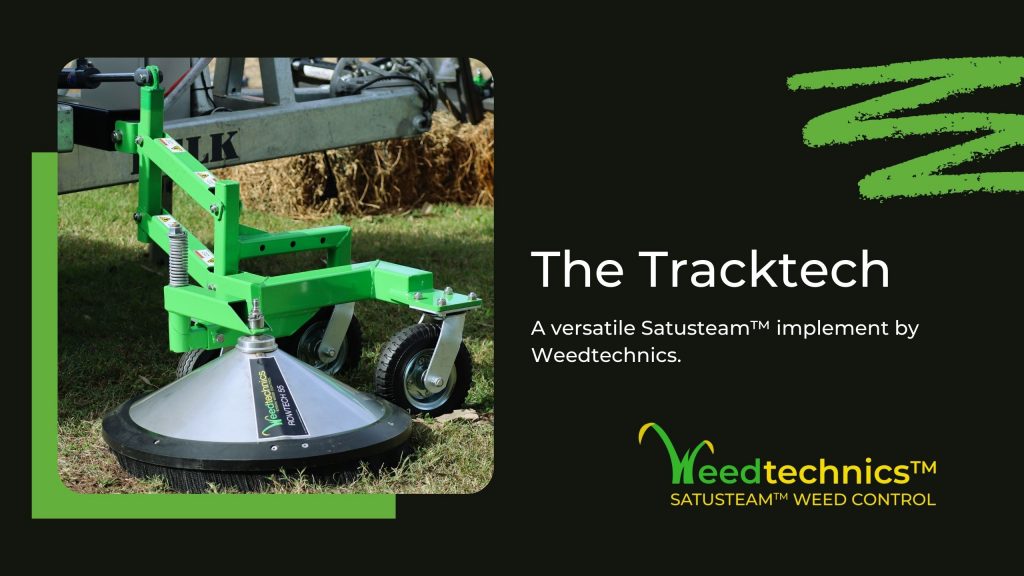 The Tracktech implement refers to a set of equipment attached to a tractor for killing weeds. The implement comprises of a hydraulic arm and a circular applicator head called the Rowtech.

The patented Satusteam™ technology works by first loading the water into the tractor. The loaded water then goes into a cylindrical enclosure to be heated and turned into saturated steam. The steam will then travel through the stainless steel arms and into the applicator head or Rowtech.

The Rowtech head is available in 55 cm or 80 cm diameter, depending upon your kill zone requirement. The overall design of the Tracktech solution makes it a great addition to your weed control equipment.

The Tracktech Implement being used to kill weeds in an organic farm.

Second, the Tracktech frame is mounted on wheels. This guides the Tracktech and its attached Rowtech applicator head to maintain contact with the ground.

Third, the Rowtech was designed with its low-profile and sprung-loaded applicator head to reach under your trees, vines, and around fence posts and irrigation risers, efficiently killing weeds.

Weedtechnics Satusteam, delivered via the ground hugging Tracktech to the Rowtech delivery head, is safe to use around people, plants and animals. It doesn’t contaminate waterways or disrupt soil quality, no matter what type of horticultural produce you have, you’re 100% safe with Tracktech and Satusteam™.

We tested the Tracktech implement in a macadamia farm owned by Russell Pete in Bundaberg, Queensland. The farm has macadamia rows that are 9 ft. to 12 ft. (3 to 4 m) apart, and Russell reached out for help because of the weeds infesting his farm.

We used the Tracktech in combination with another applicator called the Orchard Head, and delivered Satusteam™ at a speed of up to 1 km/hour. The Tracktech reached under and around each of the trees, eradicating the weed problem. On such a large property, whilst it took 3 to 4 weeks to complete the operation, Russell was very satisfied with the results.

Russell Pete and his macadamia farm is just one example of what is possible with the Tracktech and Satusteam™ solution.

The Tracktech Implement and Satusteam™ being used in a Macadamia Farm in Bundaberg.

The Tracktech and Satusteam™ combination have many capabilities that make them a stand out. With the versatility of the Tracktech arm, it allows our customers to reach almost every corner of their property and a sustainable way of getting on top of your weed problem permanently.

Martin Solomon loves both writing and researching. He graduated with a degree in Chemistry but decided to pursue his lifelong passion of writing about astrology, technology, science, and finance. He believes that if you can't excel with talent, then triumph with effort.