Nurseries turning to Satusteam™ to solve their

Weed management is a constant drain on resources, especially organic weeding, in plant nurseries. Another Australian La Nina spring and summer is only going to exacerbate the issue. La Nina is a climate phenomenon that causes higher than average rainfall.

During a dry spring/summer, nursery managers can concentrate irrigation just to their high value areas of nursery plant material. This constrains the area for weed management. However, during a La Nina, the whole plant nursery is wet. This gives weeds the advantage in the already fertile nursery environment to take hold of peripheral areas, fence lines, drainage swales and gravel paths..

Frequent rain and wind, associated with La Nina, drastically reduces the window of opportunity to use chemical herbicides, compounding the weed management problem.

The Greenlife Industry of Australia and its affiliated Nurseries are influencers of consumers. They take their role in contributing to aesthetic and scientific solutions to climate change seriously.  As part of numerous sustainability initiatives being implemented, many are switching to non-chemical weed control methods. The benefits of minimising or eliminating herbicide toxins sees the nurseries benefit from increased pollinator activity, protection of amphibians, minimisation of employee exposure, no risk of off-target damage or contamination of irrigation water.

These plant nurseries are using their social media and even their logos to promote themselves as environmentally aware, keeping and attracting new customers who are looking for businesses that align with their own values.

There is no silver bullet when it comes to weeding. Hand weeding will always be a task that is done in nurseries, but it is labour intensive. Use of whipper snippers/ weed whackers (for our US readers) are excellent for getting on top of overgrown areas along the peripherals, drainage swales and fence lines, but there is the cleanup, projectile hazards and the fact that the weed vegetation has only had a clip and is still actively growing to consider.

Flame is useful on gravel areas, in winter when there is a lot of moisture, but it’s not a good mix with many of the nursery assets like, weed mat, plastic pots, irrigation, poly houses or when there is dry grass and mulches.

Satusteam™ and what it does in plant nurseries

Satusteam™ is an effective solution for organic weeding in nurseries. It destroys all soft leaved and stemmed vegetation above ground and gets some penetration into the meristematic growth points, eliminating the weed or retarding its regrowth.

The way it works is by superheating pressurised water to 120°C and depressurising it in a patented nozzle system. The steam is delivered into the weeds as a mixture of saturated steam and boiling water. At 100°C and at just 40-60psi, it’s delivered as gently as rain. 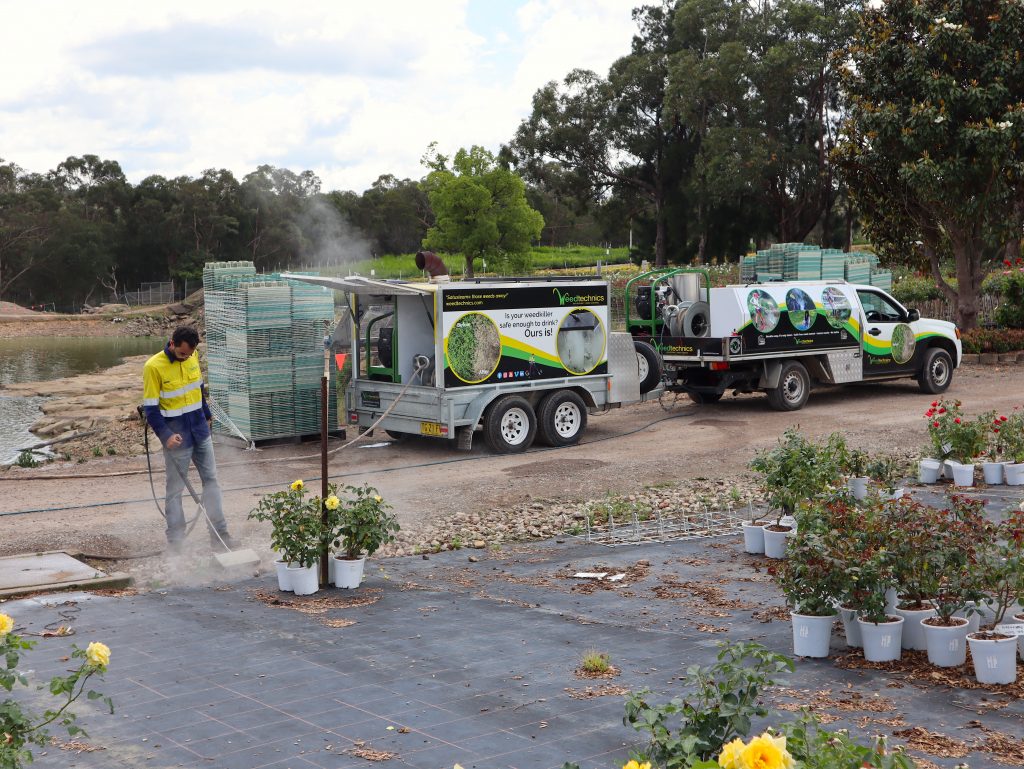 The high temperature causes the weed cells to explode on contact. This process destroys the protective cuticle of the soft leaved and stemmed vegetation, eliminating the weeds ability to hold moisture. The vegetation dehydrates in hours and decomposes into the soil within days.

Another benefit of using Satusteam™ is its effectiveness against herbicide-resistant weeds. With repeated application of glyphosate, weeds like flickweed, liverwort, and bidens, to name a few, changed their genetic markup and developed herbicide resistance. Satusteam™ assists nurseries break the cycle and control herbicide resistant weeds. Maintenance managers from the Leschenault Community Nursery stated in an interview.

“Some of the weeds were herbicide resistant so we have been able to control those with Satusteam™.”

It is also probable that pre-emergents will become a thing of the past. Satusteam™ either denatures the weed seed on contact and kills it or, if the species responds well to stratification, the combination of heat and water will germinate the seed. When that generation of weed seed germinates, it creates a carpet of seedlings, ready for obliteration by Satusteam™ .

The go to model for organic weeding in plant nurseries is either the Green Ninja Stealth or the Green Ninja Pro. The Stealth plugs into power to run the motor and pump. While the Pro has a Briggs 6.5 HP engine as a generator and drives the pump.  Both have a diesel heat exchanger to instantaneously heat the water and can draw water from a hose or water tank.

Changing applicator heads allows versatility to do the detail weeding in and around pots with the Versitech Open Head. Broad gravel paths and peripheral areas are done with the 35cm or 60cm covered heads. Switch to the pressure nozzle to gently and effectively clean off weed mats, concrete paths, algae from walls and paths and clean down plant and equipment. So one machine has a multitude of uses and gives a quick ROI. 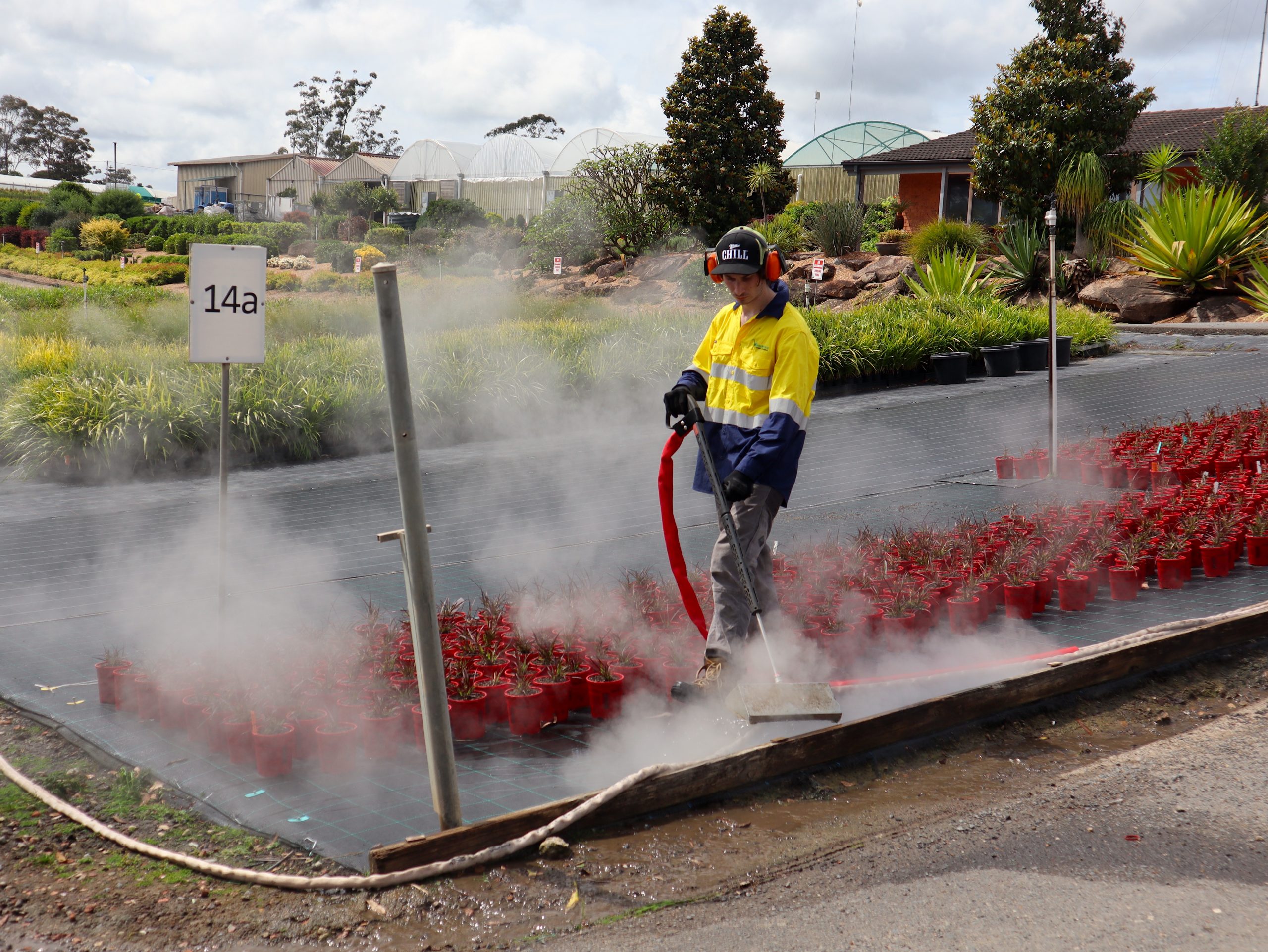 Satusteam™ being used on a weed mat at Arborglen Nursery, NSW, Australia

The benefit for a plant nursery using Satusteam™ is being able to do this in most weather conditions.

“It has opened up the time we can do weed control because we can use it throughout wind and rain. It seems to do a better job than chemicals” – Leschenault Community Nursery

Just imagine a system where your weed management is improving your presentation standards and your soil health. Without risk of chemical exposure, in a way where the costs reduce over time.

So, you’ll know that you will have the ongoing enjoyment of having turned an ecologically and health hazardous task, into a seriously productive, safe and satisfying process.

If any of the above resonates with you, let’s have a chat.