What You Need To Know About Glyphosate in Farming

I often hear that we won’t be able feed the world without herbicide or glyphosate use and GM crops. On the other side of the equation I hear that productivity of GM crops is no better now than before their introduction.  These charts may give some understanding to a complex set of factors.

This is a specific study of US agriculture. I stand to be corrected, here’s my interpretation.

Chart b. Soybean production can be effected by a range of climatic factors, pests and disease and as well as cultivar developments.  Chart b, shows variability and I really can’t determine if the glyphosate had any effect.  What is does show is that the exponential increase in use of glyphosate has not resulted in any proportionate increase in yield.

Chart c is interesting as it shows that the rate of application of glyphosate since 1992 has more than doubled, the number applications has increased from 1 to 1.6 and for a few years glyphosate was practically the only herbicide used.  Since 2008, as a percentage of herbicides used it has decreased, but this doesn’t mean less usage. 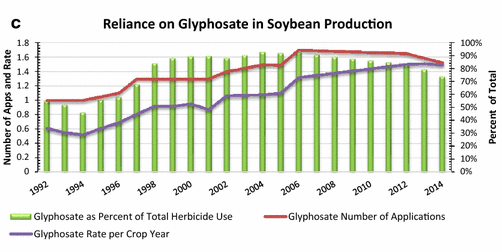 Chart d reinforces Chart c. Herbicide use since 1992 per acre has doubled and the number of herbicides being used in 2014 is within cooee of 1992, glyphosate is having less effect and herbicide resistant weeds are requiring additional types of chemical treatment to manage.

In summary for the Soybean records in US agriculture demonstrated in these graphs, GM round-up Ready Soybean has resulted in no fewer number of herbicides being used, a doubling the quantity per acre on 75 million more acres with perhaps a 20% increase in average yield.

In 1992 my eldest daughter was 2, in 2014 my youngest daughter was 16.  They do not know life without GM crops and glyphosate exposure in industrial food.  It remains to be seen the consequences of this exponential increase in glyphosate load has on my unborn grandchildren.  Personally, I can’t see the benefits in yield and necessity that the chemical and GM seed manufacturers would have us believe.

I learned from my former colleague Peter Rutherford that however young or old, we can live as ecologists. Ecology - means to take care of wherever we are or wherever we go. I was already living that way, but it was good for it to have a name.

Being at Weedtechnics allows me to work as an ecologist.

As a trained graphic designer I find delight in good design wherever I see it or make it. I’m still learning to grow food. I said at a Retrosuburbia trainer’s course ‘The garden in my head is much better than reality.’ I’ve been dipping into family history, but still have to bring it to life for others. My happy place is picking up a paintbrush to paint the house. My family enjoys healthy food and hearty conversation around the dinner table.

We have a planet to save. Humans are not very good at change, so start by changing one thing.